The Study is stopped

The EPA Research Study on Fracking was targeted by the campaign against fracking as research showed the study was compromised – it was being led by companies with huge vested interests in the oil and gas industry.

Following the rally outside Leinster House on November 5th 2015, tenders for contractors to set up monitoring stations in Fermanagh, Leitrim and Clare and do air, water and ground monitoring for 12 months were not issued.  Senator Paschal Mooney, who was asked the question of the EPA that week, said that “there are no plans to initiate this process at the moment”.

Basically it stopped the Research Study in its tracks. The September progress report had indicated that most of the desk research was “nearly complete” and what remained was the study of the local terrain and its suitability for fracking.  Without such monitoring, the study couldn’t be finished and therefore was worthless. 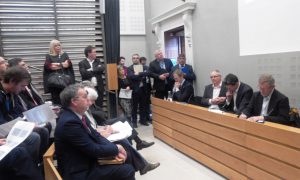 A statement from the Department (DCENR) on February 2nd 2016 confirmed that the study had been stopped after its first phase, which included an overall look at regulations and legislation governing fracking. Phase 2, on-the-ground studies in Leitrim and Fermanagh which would have included some drilling, would not proceed and a report of Phase 1 would be published in Q3 of 2016.

Dr. Aedín McLoughlin came with the statement: “GEAI is delighted with this news. Before Christmas, Minister Joe McHugh, who has responsibility for Natural Resources, said that he had requested an interim report from the EPA. It is great news that this has been confirmed. Basically, the study is stalled and, moreover, it is unlikely to proceed in the future – we understand that the contract with the lead research contractor – CDM Smith – finishes in August this year, two years from signing.

However, the campaign does not end. Now we will push for legislation that will ensure that fracking is never introduced into Ireland – the last hurdle. We are launching the “SIGN THE PLEDGE” campaign on Friday – asking all candidates to sign a pledge to support legislation to ban fracking in Ireland permanently.”